The draw was done at the PG Crime Stoppers’ Officers and Watch of the Year awards  presentation. Total sales were $5,140.

Congratulations to Nyree Collins who won $2, 570! 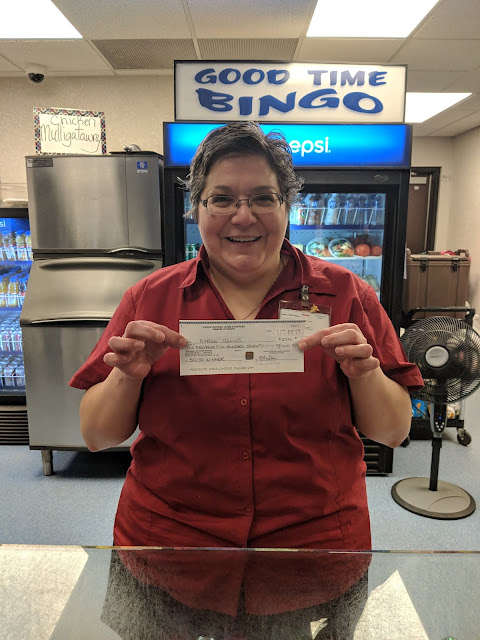 Two Police Officers and a Watch have made extra efforts to support the program over the last year and have been recognized by the local award winning program! This year marks the 6th annual presentation of these awards.

Officers of the Year
Prince George Crime Stoppers would like to congratulate co-officers of the year, Cst. Mike Mikkelsen and Cst. Dave Hallmark.
Cst. Mike Mikkelsen is now in his eleventh year with the RCMP, graduating from the RCMP Training Academy in Regina, Saskatchewan in 2008.  Cst. Mikkelsen spent his first three years in Fraser Lake, BC, before accepting a transfer to Prince George in 2011.  Cst. Mikkelsen has worked in General Duty responding to calls from the public his whole career, but is in the process of joining our Forensic Identification Section.  Cst. Mikkelsen grew up in northern BC.
"Crime Stoppers is a partnership between the RCMP and the community, which has proven time and time again to be very valuable" says Cst. Mikkelsen.  "When the public provides accurate and detailed information through Crime Stoppers, it gives us tools to investigate these matters and bring them to a positive conclusion.  Through these investigations, we make Prince George a safer community and have a direct impact on crime in the city."
Cst. Dave Hallmark has been a member of the RCMP for nearly eight years, the last three of which have been at the Prince George Detachment, and the last year of that in the Detachment's Traffic Services Section.  Previously, he was posted to Castlegar, BC.
"When people think about Crime stoppers they don't necessarily think about the traffic section" say Cst. Dave Hallmark.  "However, with the tips we received, we have been able to catch both impaired and prohibited drivers in our community.  This makes our roads safer, and ultimately our community safer.  I would like to encourage the public to continue to send information to Crime Stoppers about impaired drivers, individuals driving without a valid licence, prohibited drivers, people driving without insurance, and dangerous drivers. Names and licence plates are a big help."

General Duty Watch of the Year
The Traffic Services Section is the 2018 Watch of the Year.  Congratulations to Sgt. Matthew LaBelle, the supervisor in charge of the Detachment's Traffic Services Section.  Through his leadership, the Traffic Section has actively sought after information from the public through the Crime Stoppers program to seek out persons that are actively driving when they should not be.  This includes impaired driving and prohibited drivers.
It is an honour for the Municipal Traffic Section to be recognized as the Crime Stopper Watch of the Year" says Sgt. Matthew LaBelle, the supervisor in charge of the Municipal Traffic Section.  "Municipal Traffic makes every effort to enforce the Motor Vehicle Act and Criminal Code of Canada at locations where we believe have the most impact on road safety, but we can't be at all places at all times.  This is where we rely upon the community as our partners in road safety, who stand up and let us know where there are issues.  The Crime Stoppers Program is an excellent alternative for those who want to remain anonymous, but cannot let criminal behaviour continue.  If you know of someone who is regularly driving while impaired, or driving with a suspended or prohibited license, call Crime Stoppers!  We don't need your name, just your information.  We will make efforts to apprehend this person and increase road safety."

There are two ways to submit a tip to Prince George Crime Stoppers anonymously 24/7 365 Days a year:
·         The traditional method of calling 1-800-222-8477 and providing information to a trained operator is still very popular. As an increasingly popular alternative, you can submit a typed tip via our website at www.pgcrimestoppers.bc.ca.
When providing tips, please be as detailed as possible and remember we don't want your name, just your information!  All methods are completely anonymous!

As one of the 86 Crime Stopper programs throughout the country, Prince George Crime Stoppers is a proud partnership of the local media, police and residents of BC's northern capital.  Prince George Crime Stoppers is a not-for-profit society run independently of the police by everyday citizens like you!  All information received is anonymous and is provided to the police in the hopes it will further investigations and lead to arrests, seizures and recovered property.

For more details about Prince George Crime Stoppers, our community events or our 2018 statistics, please see our website at www.pgcrimestoppers.bc.ca.