Crime Stoppers Officer and Watch of the year

One of our favourite parts of celebrating Crime Stoppers month is honouring the important of our local RCMP partners.
Every January we present two awards: Officer of the Year and General Duty Watch of the Year. Today Cst. Dong Kwak received 2017 Officer of the Year. Originally from Ontario and based in Prince George since 2014, Cst. Kwak was recognized for his keen investigative skills and commitment to following up received tips.
First time recipient, "A" Watch, was recognized for completing the highest volume of investigated Crime Stoppers files in 2017. All the members in this shift have demonstrated an impressive dedication to the efforts of Crime Stoppers
On behalf of our Board, we thank all the RCMP members for their support - we are proud to work with you
Thanks. 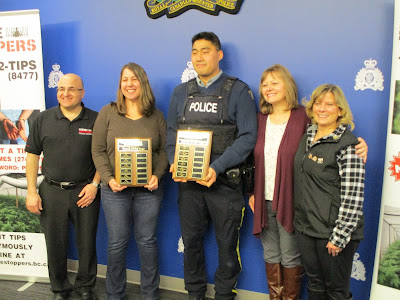 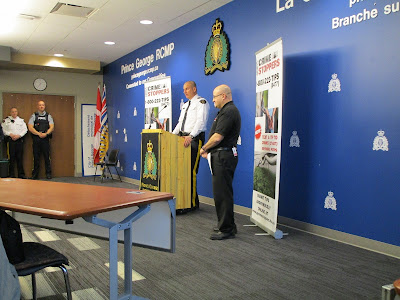 Take A Bite Out Of Crime - PDF 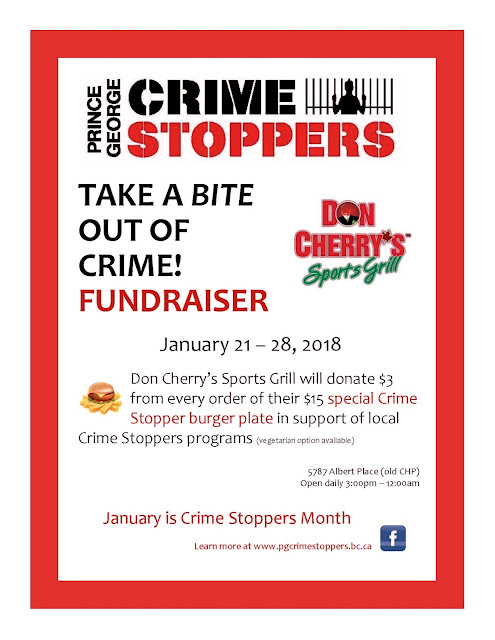 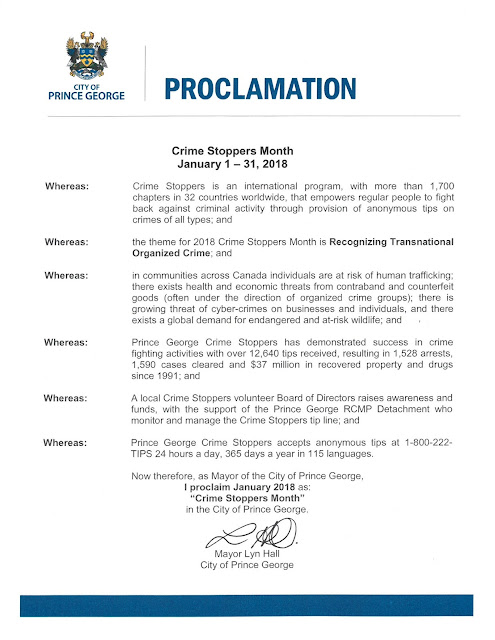 PGCS continued our partnership with Shred-it Mobile Shedding Services for the public to shred their personal documents for a small donation.  It was well received by the public and kept the shredding truck very busy! Look for our Spring Shred-It Event on Saturday April 21st, 2018 at the Walmart Parking lot from 10am -2pm.

As part of Crime Stopper month, join us at one or all of these community events to learn more about the program and to enter to WIN an exclusive Queen 40th Anniversary DVD Set and other prizes including PG Cougars Tickets from CN Centre, 99.3 The Drive, 101.3 The River and PG Crime Stoppers!:

On Friday January 12th, PG Crime Stoppers will be the Spruce Kings home game vs Cowichan Valley at 7pm. Its Spruce Kings Family Fun night and you can WIN another Queen 40th Anniversary DVD set and other prizes with a fun contest during the 1st intermission! You can find us on the concourse as you enter The Rolling Mix Concrete Arena.

There are two ways to submit a tip to Prince George Crime Stoppers anonymously 24/7 365 Days a year:
·         The traditional method of calling 1-800-222-8477 and providing information to a trained operator is still very popular. As an increasingly popular alternative, you can submit a typed tip via our website at www.pgcrimestoppers.bc.ca.
When providing tips, please be as detailed as possible and remember we don't want your name, just your information!  All methods are completely anonymous!

As one of the 86 Crime Stopper programs throughout the country, Prince George Crime Stoppers is a proud partnership of the local media, police and residents of BC's northern capital.  Prince George Crime Stoppers is a not-for-profit society run independently of the police by everyday citizens like you!  All information received is anonymous and is provided to the police in the hopes it will further investigations and lead to arrests, seizures and recovered property.

For more details about Prince George Crime Stoppers, our community events or our 2017 statistics, please see our website at www.pgcrimestoppers.bc.ca.